Tablets, smartphones and electronic and handheld devices. The children should not abuse it, and according to some associations for the defense of childhood these tools should even be banned for toddlers.

There is a lot of talk about new digital generations, but are the technological tools that adults use every day really safe and harmless for children? In fact, there are some doubts on the subject and for this reason we want to invite you to reflect on an issue that we believe is really important, especially since handheld electronic devices are increasingly present both in our homes and in schools. It is not a question of abolishing technology but of making good use of it, with intelligence, and of preventing it from causing harm to children.

Here are 10 reasons why kids shouldn’t abuse tablets and smartphones.

In China and the US in recent years a real alarm has been triggered on the addiction of children and adolescents to video games, tablets and smartphones. This is a real screen addiction. It has been calculated that children at the age of 7 are likely to have already spent a whole year of their life in front of TV and video games. A fact that should make all parents reflect on the daily activities carried out by children.

Development of the child at risk

A new study has found that the increasing use of mobile devices from the earliest years of life can harm children’s development. This was revealed by research carried out at the Boston University School of Medicine. If children have a tantrum, smartphones and tablets must not become the panacea for all ills. Better find practical and creative alternatives to calm them down.

According to research conducted by doctors at Cohen Children Medical Center, touchscreen devices when used at an early age cause language delays and poor language skills. All, including the so-called “educational games”. In particular, in the course of the study it was noted that in children who used non-educational apps, a delay in language development emerged.

Changes in the brain 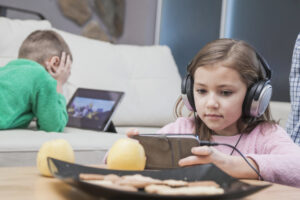 According to some experts, spending too much time in front of a screen can cause changes in children’s brains similar to those that would occur in a person addicted to alcohol. This is a very troubling claim that should lead parents to try to limit their children’s screen addiction.

The negative impact on the health and brain of children in the opinion of the experts who are studying the phenomenon begins after two hours of viewing or using technological tools and can result in health problems including obesity, high cholesterol and hypertension, inattention, learning problems, sleep disorders and depression. Here more information.

James Carter, a chiropractor from Niagara Park in Australia, has collected and shown numerous radiographs of young and very young people showing a backward curvature of the neck. This anomaly would be due to the weight of the head that is badly distributed on the spine when reading messages or writing on the mobile phone. So, since childhood, it is better not to overdo it with smartphones and tablets.

We probably do not yet fully understand the effects of electromagnetic waves on the human brain. According to the Superior Health Council, there is no proven causal link between radiofrequencies and tumoral pathologies, but a precautionary principle must still be applied to the use of cell phones, especially for children because there may still be potential health risks.

Risks of the mobile phone

The recommendations related to the risks of the mobile phone apply to everyone, children and adults. The advice to protect children is to keep the mobile phone as far away from their head as possible. Furthermore, everyone should avoid sleeping with the mobile phone next to the pillow, not stay on the phone for more than an hour (and if necessary, change ears) and wait for the interlocutor to answer before bringing the mobile phone to his head.

In 2011, the WHO had raised an alarm regarding the use of cell phones and the suspicion that some electronic devices may favor the appearance of brain tumors. The issue is still very much debated and we think that in this case it is really useful to act with a little common sense. Among the good habits to limit any risks associated with the use of mobile phones we find the suggestion to make sure that children under the age of 16 use the mobile phone in a limited way.

Parents often allow children and teenagers to take smartphones, tablets and video games with them to the bedroom before going to sleep. according to US experts it is a bad habit that can disturb the sleep of children and that in the long run could even cause insomnia. Therefore, it is better to keep electronic devices out of the bedrooms when it is time to dedicate yourself to rest.